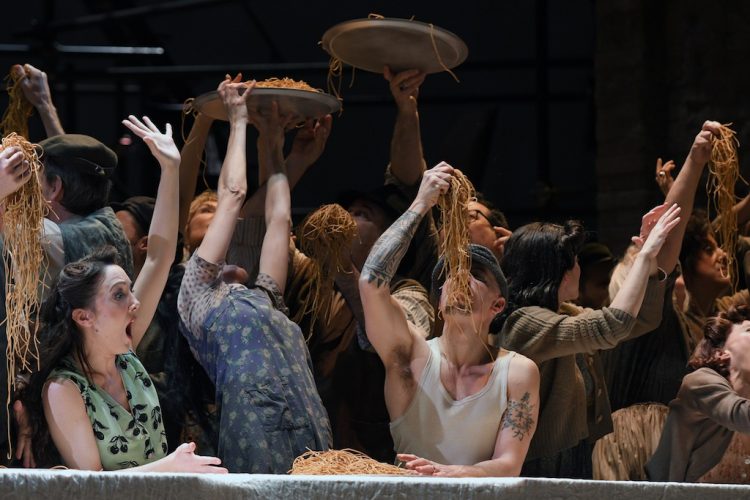 “…good craftsmanship that requires an Opera that recalls tradition, Tutino guarantees it in a superior way…”
Corriere della Sera

“Great success for the first at the Carlo Felice Theater. Ten minutes of applause for the Opera commissioned to Marco Tutino”
Il Secolo XIX

“Prolonged and enthusiastic applauses have decreed the success of “Miseria e nobiltà” by Marco Tutino, with booklet by Luca Rossi and Wolfgang Haendeler, loosely based on the 1887 comedy by Eduardo Scarpetta, staged for the first time at the Carlo Felice Theater.

The theater of the story is Naples, in the days of the referendum between monarchy and republic, a city wounded by war that literally struggles to live in. In this context misery and nobility are confronted, to the point that the former becomes the second if lived with honesty and pride, while the second becomes the first if interpreted with arrogance and contempt.

Hairpiece of irony, has been admirably brought to music by Marco Tutino, with a romantic score, intense and extremely fluent.

The booklet is remarkable, with considerable and guessed references, not always veiled, like the citation to the final joy of the people, compared to the words of Giuseppe Tomasi di Lampedusa (and, a week after the vote, it’s all a saying …). Very appropriate the direction by Rosetta Ciucchi, in a context of scenes signed by Tiziano Santi, extremely effective in describing the prevailing despair.

Good evidence of the Orchestra conducted by Francesco Cilluffo, as well as all the performers both vocally and scenically, where among all we particularly appreciated Valentina Mastrangelo in the touching role of Bettina, without detracting from others: Francesca Sartorato (Peppiniello), Martina Belli (Gemma), Fabrizio Paesano (Eugenio), Alessandro Luongo (Felice Sciosciammocca), Alfonso Antoniozzi (Don Gaetano) and Andrea Concetti (Ottavio). To forget the excellent evidence of the choir would be an authentic heresy. ”
Stedo.ge